Today I went out and tackled some more vines in my azaleas. Good thing to do? right? NO. Since the temperature was around 98 and the humidity matched it heat stroke was a possibility. I did go out early but that was little help. Working for a while in a sunny area I realized that I need to move to shade. As soaked with sweat as I was I looked as if I had jumped in the creek in front of our house. Since I had no death wish I moved to the other side of the house where shade prevailed and here is where I dipped into dementia.

There was a camellia bush that was in my plans to prune since it was at least 10 feet tall and looking spindly. It was in the shade. This job would take one thing off my to-do list so I started in. It never occurred to me that cutting/pruning the bush was a monumental task and being obsessive there was no way I would quit until it was done. 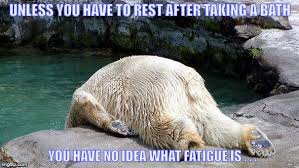 After hauling the remains to the street to be picked up by the county I raced to a cold shower and remained in that blissful place until I cooled down. I felt better but the thing I hadn’t considered was the amount of time I had spent outdoors in the heat. Exhaustion was on its way. I almost slept through dinner…a pizza which my wonderful husband picked up…and am now barely awake.

Sometime in the recent past I wrote about choosing the right amount of work to do. How the right amount makes us feel great and too much makes us  drained of our physical and mental resources. Well…I  am there. Tomorrow is a designated rest day!

Remember, we do need to work to accomplish tasks that help us to feel successful but too much will make us weary and enervated. Choose wisely!