I have often said that anyone who doesn’t like living in the USA should have to live in a third world country for at least a year. We lived in Panama for two and 1/2 years and it made a lasting impression on me. There are so many things that I saw there that changed the way I think.

I appreciate that I can live in a place where the police and the military are not one and the same. I am grateful that my home does not have to be surrounded by walls with wire on top and the only yard is inside the wall. I am glad that the law does not allow me to be arrested and dealt with without trial or any recourse. I am grateful that there still is a semblance of a middle class and not just the very rich and the horribly poor. 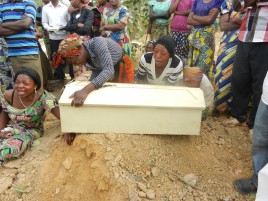 While living there I made a car trip across the isthmus from Colon to Panama City. In front of me was a small bus called a “Chiva.” Along the road the Chiva stopped and I stopped behind it to watch a family get in the bus. There were what appeared to be several generations from young children to the elderly. Several men were carrying a small coffin. The bus started up and continued on the road for several miles where it stopped at the entrance to a cemetery. There was a priest waiting at the entrance and the family filed off the bus with the coffin of a child and followed the priest to the burial site.

I was moved to tears by this incident. Just the thought of how this family lived and coped with everyday life was overwhelming. So poor that they had to take a bus with the coffin to bury their child.

We are so blessed with the life we have. I know that there are communities that suffer from poverty and sickness here. That is why, although I can’t help elsewhere, I am called to help where I can.

Luke 14:13
But when you give a banquet, invite the poor, the crippled, the lame, and the blind.

2 thoughts on “Be thankful”